An Australian Age of Dinosaurs Experience

In 2015 Winton Shire Council invited the Australian Age of Dinosaurs Museum of Natural History to take over the operation of public guided tours at Dinosaur Stampede National Monument. This joint initative, implemented in April 2016, provides visitors with a broader understanding of unique Australian dinosaurs and the world they inhabited. Visit australianageofdinosaurs.com for information on the Museum's tours and amenities.

The Winton Shire Council is pleased to announce The Dinosaur Stampede at Lark Quarry Conservation Park will reopen on Friday the 3rd July 2015. The Council has completed a major refurbishment of the facility.

The refurbishment will deliver an enhanced visitor experience. An extended viewing platform extending toward the trackways will enable visitors to fully appreciate the tracks. Complementing the enlarged viewing platform is state of the art audio and lighting that will ensure this amazing natural phenomena is highlighted to all who visit the Dinosaur Stampede complex.

Winton Shire Council Mayor Butch Lenton is enthusiastic about the upgrade. “Lark Quarry is a very popular tourist destination and an important element to the Winton landscape. The refurbishment project has significantly enhanced the experience while providing a safer site. Our guides also look forward to welcoming visitors and explaining the story of the dinosaur stampede”.

Winton is acknowledged as the Dinosaur Capital of Australia. The twin attractions of Australian Age of Dinosaurs and the Dinosaur Stampede at Lark Quarry draw tens of thousands of visitors to Winton annually. The upgrade will enhance the visitor experience and is a great win for the region.

Dinosaur Stampede National Monument is located 110km south-west of Winton (half of this on sealed road); access is by guided tours at 9.30am, 11am, 12pm, 1pm, 2pm and 3pm - times will vary in Summer. 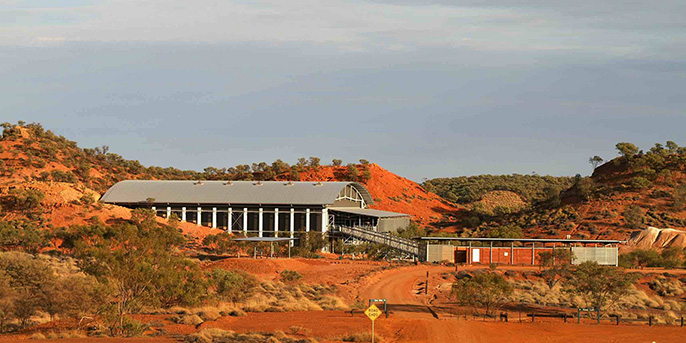 The Dinosaur Stampede at Lark Quarry Conservation Park, is the site where over 3,300 dinosaur tracks mark the site of the only known dinosaur stampede on the planet.

In a remarkable piece of scientific detective work, scientists from the Queensland Museum have pieced together a dramatic tale of hunter and hunted from the footprints left behind.

About 95 million years ago, a herd of over three hundred dinosaurs, some as small as chickens (called Coelursaurs) and some about the size of an emus (called Ornithopods) were drinking on the muddy shore of a lake. The herd panicked and started a mad dash to escape when a large meat-eating dinosaur appeared close by.

The stampede was recorded in the mud, preserved by the natural environment, and immortalised in stone. In a unique twist, the footprints of the meat-eating predator at the Dinosaur Stampede have recently been shown to possibly match the foot of Banjo – on display at the Australian Age of Dinosaurs Museum.

Now preserved inside a modern building, this amazing Dinosaur Stampede is accessible to everyone at Lark Quarry Conservation Park. The starkly beautiful red earth and spinifex-studded landscape is a dramatic contrast to the moist green world that existed at the time of the dinosaurs. Located 110km south-west of Winton (half of this on sealed road); access is by guided tours only at 10am, 12 noon and 2pm daily except Christmas Day and Boxing Day.

The Winton Shire Council is pleased to announce an upgrade and refurbishment of visitor facilities at the Dinosaur Stampede at Lark Quarry. The visitor experience will be enhanced with the construction of a second viewing platform to provide visitors with better access to new sections of the trackways.

The new viewing platform will also increase capacity to cope with the increasing number of visitors to the site. A new central platform will also enable the guide to present to visitors from within the trackways to better interpret the story around the stampede.

Winton Shire Council CEO Tom Upton was enthusiastic about the upgrade. "The Council is committed to balancing the highest quality of visitor experience with the protection and preservation of this important site. The Dinosaur Stampede Trackways are a unique tourism asset and of immense value to the scientific community."

Tourism Operators in the region are thrilled with the upgrade. Waltzing Matilda Centre Manager Neil McGilp said "Winton is acknowledged as the Dinosaur Capital of Australia. The twin attractions of Australian Age of Dinosaurs and the Dinosaur Stampede at Lark Quarry draw tens of thousands of visitors to Winton annually. Any upgrade that will enhance the visitor experience is a great win for the region and its tourism and business operators".

Work will commence as the tourist season winds down on 15th December. Due to the delicate and fragile nature of the site and the need to take elaborate precautions to ensure no damage to the trackways, the refurbishment will not be complete until late June 2015.