A Terrifying Encounter Frozen In Time...

95 million years ago Lark Quarry was part of a great river plain, with sandy channels, swamps, and lakes brimming with freshwater mussels, lungfish, and crocodiles. Rainfall was over a metre per year, so the surrounding lowland forest was lush and green..

On the day our drama unfolds, some 95 million years ago, herds of small two-legged dinosaurs came to drink at the lake. There were at least 150 dinosaurs of two different kinds - carnivorous coelurosaurs about the size of chickens, and slightly larger plant-eating ornithopods, some of them as large as emus.

A huge meat-eating theropod, smaller than a Tyrannosaurus, approached the lake. It slowed, saw the other dinosaurs gathered at the water’s edge and began to stalk, then turned and charged. The stampeding herd of smaller dinosaurs left a chaotic mass of footprints in the mud as they ran to escape. 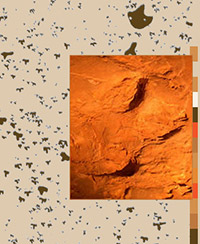 The site where the dinosaur footprints were found was once a streambed leading into a lake. The water level had dropped, exposing mudflats. When the dinosaurs stampeded, they left perfect footprints in the half-dried and still plastic mud. Sun, wind, and rain would normally destroy tracks like this. But just a few days after the footprints were made, it began to rain and the lake rose gently, covering the tracks with sandy sediments before the mud had dried enough to crack. The next flood buried them below a meter of sand and a meter of mud. Over time, more sediment was laid down. As millions of years passed, the sediment layers were compressed to form rock and a low range eventually formed.

Local Station Manager, Glen Seymour, first discovered the Dinosaur Trackways in the 1960s. He thought they were fossilised bird tracks, and showed them to local enthusiast Peter Knowles. What they were looking at was, and still is today, the world's only recorded evidence of a dinosaur stampede.

It wasn’t until scientists visited the area in 1971 that the Trackways story began to unfold. Although the scientists were looking for Cretaceous mammals, Peter showed them the dinosaur tracks as a matter of interest. The last period of the Mesozoic era, around 146 to 65 million years ago. Many dinosaurs and other organisms died out at the end of this era.

To find out more about the discovery of the Trackways:
Fact Sheet 1 - 'The Lark Quarry Dinosaur Trackways Stampede' (306.95 KB)

In the years that followed, the Trackways began to deteriorate and palaeontologists from Queensland Museum raised concerns about the possible loss of the Trackways unless action was taken to stabilise and protect them from further damage.

A new conservation building, funded by Queensland Heritage Trails Network, was erected in 2002. 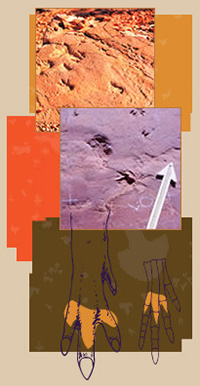 Fossilised footprints would not tell us much without scientific interpretation. Scientists used mathematics, comparisons and inspired guesswork to uncover the story of the Trackways.

Back in the lab, scientists studied each footprint print on a latex mould taken from the site. The footprints were measured and described, and (where individual tracks could be followed) pace length, stride length and pace angulation were measured.

Scientists then compared the footprints to dinosaur skeletons from all over the world with feet roughly matching the Lark Quarry tracks.

The dinosaur running speeds were worked out using equations based on locomotion of living animals, incorporating size, weight and flexibility differences.

Once the scientists knew which dinosaurs made the tracks, how many there were and how fast they were moving, they were able piece together the stampede story.

To find out how scientists knew it was a stampede:
Fact Sheet 1 - 'The Lark Quarry Dinosaur Trackways Stampede' (306.95 KB)